I'm sorry I haven't posted in a while.  Life is crazy right now.  We're having a baby and moving in less than two months, and I've got to prepare for the Logic course I'm teaching this summer at CTY.

Regardless, I've been doing some thinking and I've decided that this blog is too important to me to neglect.  I'm going to make a new rule for myself -- I will make a substantial post (~750 word minumum) at least once a week.

Anyway, now that I've told my story (or at least the most important parts), I can start my log where my train of thought is taking me at the moment.

I'm working on a new book.  As I finish the first draft of each section they'll be posted at Philosophy, Ecology, and Spirituality.  My posts on this other blog will occur much more infrequently, but will be more thoroughly thought-out.

I'm excited about this new book because in it I'm trying to express my views directly, rather than wasting my time trying to criticize what most people seem to think.  Perhaps it's modern academia that fosters this bad habit of attacking opposing ideas without bothering to develop our own.  Or maybe it's the scientific idea that you've got to prove everything.  Anyway, I had better not start saying what I think is wrong with these ideas, or I'll fall back into the trap.

The book will be an attempt to explain my worldview, a view that I've been developing since college, but which has frustrated many attempts to express it.   What is unique about my view, I think, is that it is based on a particular notion of "vitality," a notion that I've encountered in science, philosophy, and religion.  I'm still trying to figure out what I mean by this word, but it has something to do with the divine, something to do with ecology and evolution, and something to do with living life with intensity and spirit.  I do not see vitality as a sort of immaterial force or supernatural ghost-like presence.  Instead, I see it as a kind of creative organization in the physical world.  Its complexity is beyond our understanding, since we are a part of it.  Since it is beyond us in this way, one might consider it part of God.

Everything I've just said is apt to be misunderstood.  That is why I have to express it in book form.  It's a way of seeing things, not a particular fact or belief.

I've just finished writing my rough-draft sections on the Big Bang, the chemical elements, and the origin of life.  Now I'm working the next section, Early Life.

What interests me most about the early stages of evolution is the occurrence of ecological revolutions.  These cycles of destruction and creation seem to mirror the cycles of civilization and barbarism that humans are still experiencing.  For example, between about 600 and 500 million years ago, the oceans were dominated by sea-floor deposit feeders (who dig around in the mud for food) and by filter feeders (who strain tiny particles from the water).These types of organisms were driven almost completely extinct when predators appeared on the scene, 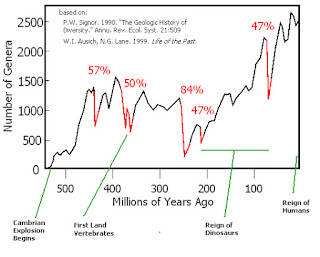 I'm still in the process on reading up on these revolutions, but what I know so far is already telling.  Of the dozen or so major ecological shifts experienced during the history of this planet, about half of them have involved the extinction of 40 to 90% of all genera.  ("Genera" is the plural of "genus", which is the categorization of organisms just above species.  For example, dogs, wolves, coyotes, and jackals all belong to the genus Canis.)  But if 40 to 90% of all genera have gone extinct so many times, why have we never seen the extinction of 100% of all genera? why have we gotten so lucky every time?  Could these extinctions really have been based purely on chance?  It would be like seeing an addicted gambler doing his best to gamble away his life savings, but coming out on top every time.  You would come to suspect that he was cheating somehow.

This problem is given scant attention in the mainstream scientific literature.  At best, biologists and ecologists treat it as an unsolved problem, and offer flimsy explanations in terms of continental collisions, meteors, and climate change.  But most of these explanations miss the point, because they all appeal to accidental conditions that could easily have been otherwise.  It does not solve the problem of how we could have been so lucky.

There are a number of scientists on the fringe who have been studying such problems for decades -- so-called "complex-systems theorists" and "chaos theorists."  They are more often than not laughed out of conferences and mainstream journals, and their science is often shoddy, but at least they've had the courage to face the question.  (See Stuart Kauffman's "Investigations," for example.)  It was reading the work of these scientists that first inspired me to think about evolution and ecology over 10 years ago.  I've come to a definite view on the problem of mass extinction, but my challenge is to explain what this view is.

Anyway, maybe you see why I'm taking my time on this next section.  I do see a way forward, though, or else I would have skipped the issue entirely.  The view that I've tentatively come to is that Darwin's theory of natural selection must be applied not only to individual species, but to entire ecologies, even world ecologies.  Scientifically, I admit that this approach can only lead our studies into a quagmire.  It would be impossible to enumerate all the various environmental factors that would affect the ability of an entire ecology to compete with other ecologies.  However, I see this approach as being philosophically and spiritually fruitful.  If we accept that it is impossible for us to explain the evolution of the world ecology in all its unimaginable complexity, we can still accept that there are laws of nature governing its overall evolution, laws which I believe may have profound effects for how we think about the history of civilization as well.

I admit that this is all still very sketchy sounding.  But I'm making steady progress on it and hopefully I'll have something clear and easily understandable to say about it in the coming weeks.

I'm also reading John Michael Greer's book "The Ecotechnic Future."  It is incredible.  I'll be posting a review next week, if I can finish it by then.  For now let me give the full quote that was too long in its entirety to post as my Facebook status:

"[S]ustainable techniques such as composting, beyond their practical value, can be used as templates for a much wider range of approaches.  These refinements are not limited to the realm of the technical.  The contrast between the monumental observed absurdity of industrial society's linear transformation of resource to waste, on the one hand, and the elegant cycle of resource to resource manifested in the humble compost bin on the other, makes it hard to avoid challenging questions about the nature of human existence, the shape of history, the meaning of the cycles of life and death and the relationship of humanity to the source of its existence, however that may be defined.  Over the centuries to come, perspectives such as these are likely to shape the collective conversations of the societies that succeed ours" (p. 111-112).
Posted by Sam Thomsen at 12:58 PM

Email ThisBlogThis!Share to TwitterShare to FacebookShare to Pinterest
Labels: Science and Ecology

Get email notifications for new blog posts or book releases: