A Nun's Rebuttal Against Masks, Even When Demanded by Religious Leaders

Posted by Sam Thomsen at 8:21 AM No comments: 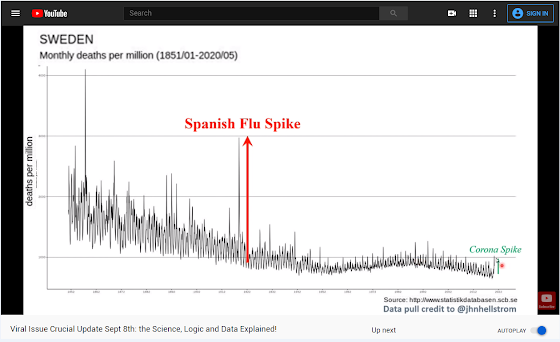 Email ThisBlogThis!Share to TwitterShare to FacebookShare to Pinterest
Labels: Constitution, Science and Ecology

Links: Unite for Freedom, Homeschooling Surge, the End of the Pandemic

"Those who would give up essential Liberty, to purchase a little temporary Safety, deserve neither Liberty nor Safety." -Benjamin Franklin

I've run across a lot of great articles online over the last few weeks and I suppose I had better post them now before there are too many. I hope you find the below helpful.

When all of this starts to make me feel overwhelmed and confused, here's what I remember to keep my sanity: (1) powerful people not only stand to make billions on these vaccines, but they benefit greatly, as all tyrants do, by taking away freedom of speech and exploiting rule by experts, (2) this sort of tyranny has happened in civilization for thousands of years and is nothing new, and (3) it gives the brave and true a chance to stand for what is right, to show real heroism and compassion. Don't ever get discouraged. Continue in your peaceful work and keep being a credit to our generation. May God be with us and with the cause of truth and freedom in these trials.

For some inspiring quotes from the philosophers Thomas Jefferson, Thoreau, and Cicero, you can scroll to the bottom.

These two articles on AIER win the award for the best, most concise, and most sobering short pieces arguing for an end to all this coronavirus nonsense. Basically, the lockdowns are costing us far more lives and money than they are saving us. Insanely more:

1. You may have heard about some of the problems developing the COVID-19 vaccine. Here's an interview with a specialist that gets into some of the more disturbing technical details. In particular, it looks like the vaccine over-sensitizes the immune system so that when you finally do get covid the reaction can be so strong it causes death. This was a problem with the SARS vaccine years ago:

2. "There is no good evidence that facemasks protect the public against infection with respiratory viruses, including COVID-19." A scientific study.

4. Another fantastic summary of why the lockdowns are ridiculous. Very long (with 3 parts) but great citations and Part 3 is pretty recent:

5. "Older Americans should be anti-lockdown activists":

6. Facemasks were actually ineffective with the Spanish Flu:

7. How did early Christians respond to plagues? It was the opposite of lockdown: stay and care for the sick, as Jesus taught. And it was more effective.

How Did Early Christians Respond to Plagues? - The Good Book Blog - Biola University

9. The brutality of lockdown is crossing over into outright totalitarianism in some places:

10. Big Tech is censoring lockdown protests around the world. It's a growing movement and there are millions of people at some of these gatherings:

11. The "pandemic" if you can call it that, is ending. We are well past the peak of the curve. This article explains with some telling graphs comparing this years' spike in deaths compared to previous years':

12. This is an old article, very concise, but terrifying in its implications. It compares censorship in China to what has now become a global censorship campaign:

Google, whose staff is now mostly Chinese according to one whistleblower, was implicit in this censorship, as I recently discovered in a 2008 book, Blown to Bits. American Google results for the search "Falun Gong," gave terms and phrases like "morality," "Buddha's School," "Buddha Fa," "Chinese government is terrified," "spiritual movement," and "freedom of belief":

The Chinese version of the Google search, as Google was complicit in programming for, features terms and phrases like "Cult," "sabotage," "homophobic," "racist," "hijacking," and "propaganda."