The Story of "Progress Debunked"

The release date is only two weeks away, and I think its fitting to tell the story here of how my book came to be and why it has been such an important part of my life. Much of this story can already be found scattered among my posts on this blog. But I'd like to bring it together. 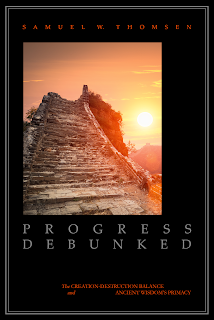 The story begins with myself as a very unsatisfied philosophy grad student. Why exactly I was unsatisfied was a mystery even to myself. Though I loved reading the great philosophers, from Plato to Nietzsche, modern academic philosophy seemed to have become generally pointless. It was merely an ever-growing collection of terminology-heavy articles each trying to prove certain other articles wrong. It was a giant game of "You must be wrong about X and Y because of Z," and "Ah but Z must wrong because of Q and R," and nobody knew where it was going and nobody seemed to care. Something was wrong, but what exactly?

At the time I thought that the problem was a kind of religion that had been erected, one worshiping Reason, or maybe Rationality, or Logic, Math, Science, something like that. Or all of the above. Of course my notion that Reason was a Religion was nothing new, and is called "Postmodernism." Stereotypically, postmodernists hate rationality. That wasn't exactly where I was coming from. I was ready to admit that logic and reason are good things, tools for finding truth. But still: why worship a tool?

And here was one of the great mysteries I wrestled with. How had we come to build this giant institution -- the University -- whose one department devoted to finding the meaning of life -- Philosophy -- does little more than worship a tool, reason?

I spent many long walks in the park, asking myself things like: If science has become a religion, why? How do religions start? Why is it not like any other religion?

The obvious answer, of course, and the whole reason I had studied physics as an undergrad, and was now studying the philosophy of science, was that Science had produced Progress.

The more I thought about this, the more it made sense. Our worship of science was essentially the same as our worship of "progress." The entire soul-deadening boringness of academic philosophy (and much of academia as whole ... and much of modern life!) was due to this obsession with incrementally making the entire world a better place. Hence big, bureaucratic science was the meaning of life. Hence big, bureaucratic politics and the United Nations, and their goals of world peace and solving world hunger -- these were the only things that were supposed to matter -- and in the grand scheme of things adventure, romance, poetry, faith, courage, and all the things that used to make life wondrous were now deemed: worthless.

This is to state in extremely mundane terms a powerful set of emotions that already made me spend several hours a day writing poetry and aphorisms and stories trying to make them clear to others. It seemed to me, even at these early stages, that ultimately it was fiction and poetry that was capable of expressing the vim, vitality, and vigor of life as it should be, close to nature and lived for life-and-death stakes. (Why then, was I never a soldier? I guess because I've always seen myself as a mental or spiritual soldier. To understand the sort of emotion that often drives me, you might watch Ken Burns's Civil War documentary, start to finish, so well evoked that when the veteran Civil War reenactors around the year 1900 say they love the enemy soldiers they fought at Gettysburg, and are eternal friends with them, and wish to die and go to Valhalla with them and live it all again and again, it makes perfect sense. At the same time, I must say that war is not the meaning of life, especially modern war, which tends to be either police action, or to occur at such a large scale that the individual soldier is little more than a robot in a vast, honorless machine. Feudalism is closer to what I mean, more as an ideal to balance all the opposite excesses of modern ideals than as any sort of utopian goal.)

It was in this day-to-day mood back in 2006, reading articles on human genetics for a philosophy seminar called "Genes and Behavior," that it finally hit me. I came up with a good logical argument that progress is ultimately self-defeating, that things will always come back to a balance. I'm not going to try to explain the theory here. I summarize it elsewhere on this blog, and to explain it in detail is the purpose of my 200-page book. For the purposes of our story, all you need to understand is that I had stumbled on a logically-tight argument that progress is impossible. Armed with this, a lot of things started to come together. The following semester, as luck would have it, I took a seminar on the development of Darwin's theory of evolution. It turned out that Malthus's theory of population was a huge influence on Darwin. Reading Malthus's original Essay for the first time, the logical structure of a more general argument against progress now formed in my mind.  I felt ready, even back in 2006, to write up an article debunking progress.

And now the real philosophical work began. Not on my book -- I wouldn't try my hand at a draft for another 2 years. But on the only real question for a philosopher -- the meaning of life. If life is not about saving the world from poverty, what then was it about?

At the time I did believe in God, but I had no idea how to form a relationship with Him. I knew that there was something meaningful beyond Reason to live for, that life was an adventure of some sort, but wasn't quite sure how to visualize it, let alone pursue it. The story of this post-progress journey is told largely on this blog. And I will not try to summarize it here. Suffice it to say it changed everything. I developed a relationship with God, I started a family, and I finally left academia to take up independent scholarship and writing.

But before all this, in 2008, I took a leave of absence from grad school to write my argument up as a book. I had already written down the meat of it in a paper for a seminar, but the professor had given me an A- because it was not very relevant to the course material. I had also brought up my argument to professors and friends at the bar or at parties, but they uniformly dismissed it, whether as "eugenics" or as "the old idea that people will get stupider and lazier under socialism" or as "a recap of the Bell Curve."

My argument, I maintain, is none of these things. I have spent years reading the literature on human heredity and population growth, and, aside from Malthus, I've never encountered anything like it. All the eugenicists, anti-socialists, and Social Darwinists want progress more than anyone--they just think we need to sacrifice much more to achieve it. But I'm not saying progress is harder than we thought. I'm saying it's impossible.

And so I spent two years living on rice and eggs in a tiny apartment, floor scattered with books, reading and writing up draft-after-draft explaining why natural selection is an ineliminable part of human life. None of these drafts seemed to come out just how I wanted them. Looking back, I think I was too obsessed with making the argument as theoretical and mathematical as possible. It became so abstract that it kept becoming unclear, even to myself, how it was relevant to anything. The anxiety that had been caused by being dismissed as a eugenicist was getting the better of me. I wrote hundreds of pages of notes and drafts simply trying to debunk eugenics, to prove that even eugenics could not produce progress.

And as I delved deeper into these dark schemes, even darker schemes for progress came to me that would have to be debunked. ... So maybe we can't afford to genetically engineer all new babies in the world. But maybe some world dictator might decide to nuke the majority of the world's population and re-engineer it from scratch, creating a new Adam and Eve genetically programmed never to mutate in any way that would destabilize their own DNA ... or maybe an endless solar-powered virtual reality simulation where a fixed population could experience all the pleasures they wanted and even experience adventures and death, only to be reborn ...

Thus forcing the theory to become still more abstract. I had to apply my theory not only to biological evolution but extend it to cultural evolution as well.

In the end, none of this would be in vain. The theory was refined and deepened by these dark meditations, and now the book as it will be published is brief, yet quite general and theoretical, only focusing on those few schemes for progress (birth control, eugenics, transhumanism, AI) that people already take seriously. But the structure is all there, I believe, to attack nearly any ridiculous, dark, or even pink and fluffy scheme for progress that might be thrown at it. Of course, only posterity will really be able to judge this.

Anyway, when I returned to my philosophy department in 2010 with my manuscript, the professors did not seem very interested, and what was worse, I was not very confident in my most final draft. I felt it had been rushed, even after two years, and I was afraid of coming across as "cranky." I was afraid, furthermore, that they really wouldn't consider it to be "philosophy," since it doesn't talk about any of the narrowly technical topics that modern academic philosophy is usually about.

I gave them parts of it to read, and they were indifferent. And I realized that I didn't care if they cared anyway, as the whole modern philosophical institution was, provably in my view, pointless anyway. The only sensible thing to do was leave, and so I did, beginning my career in IT back in 2011 at a menial call-center help-desk job.

At the time I believed that you needed a PhD to publish a nonfiction book, so I decided to establish a career in fiction first. So up until 2016 I had been working on fiction writing, and have a small body of work to show for it, mostly science fiction, and I hope to publish much of it in the next couple of years.

But in early 2016 someone asked me why I didn't finally publish my philosophy book. They pointed out that nonfiction writers are scarce, and nonfiction readers plentiful and voracious. Everyone wants to write a novel -- that market is saturated. Why not start with my nonfiction?

I realized that my plan was all backwards. In the modern publishing world, largely dominated by independent authors, a PhD is no longer necessary to establish yourself in nonfiction.

And so I wrote up my final draft, and after all those years of meditating on progress and practicing my writing, it came out easily, flows well (I think), and now it is ready. It will be available on Amazon starting September 15.
Posted by Sam Thomsen at 6:08 AM

Email ThisBlogThis!Share to TwitterShare to FacebookShare to Pinterest
Labels: Against Progress, My Break with Academia and Its Aftermath, Revitalizing Philosophy