Review of "Ultrasociety" by Peter Turchin

For a brief pop science book, Ultrasociety goes very deep, and it’s rich in historical and theoretical insight. Like Guns, Germs, and Steel, it’s a good introduction to the history of civilization, and will have plenty for even an expert to chew on. But like most popularizations, Ultrasociety tends to overstate the success and generality of its theories, and to gloss over any aspects of history that fall outside its scope. 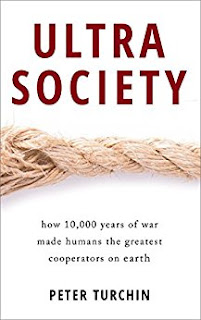 To his credit, Turchin dismantles a number of popular misconceptions about cultural evolution. For example, he challenges the (already absurd) idea that complex civilization is the accidental result of selfish genes that dispose us to kindness toward relatives. Rather, he points out that group selection on culture is a more plausible explanation and better supported by the evidence. He also disputes the idea that religion is a memetic virus that does little more than cause violence. The evidence again shows the opposite—more religious cultures tend to show less internal violence and more cooperation and prosperity. He has many insights like this scattered throughout, and they make the book well worth reading.

Nevertheless, Ultrasociety falls short of its stated aim, to explain the evolution of enormously complex and large societies like our own. It focuses on the time period between 5000 BC and 1500 AD, and only occassionally discusses cultural evolution following the advent of gunpowder and the printing press. In fact he admits the gap and promises a more thorough analysis of modern civilization in his next book. But the blind spot here is huge. Between 0 AD and 1500 AD, you saw the collapse of the Roman Empire and arguably no significant decrease of violence in Europe. So his main thesis, that cultural selection tends to create larger and more cooperative civilizations through war, is left without convincing support for the last 2000 years of history. Not only has the trend toward larger civilizations not been uniform, but the last 500 years has involved powerful forces aside from war. Turchin admits the shift from violent to nonviolent means of conquest over the last century, but seems to see it as a victory for his view. True, this would seem to be a positive development, but he does little to show how his theory can account for it.

The problem is that the scope of his explanation is too vast. Nobody can ever explain in complete detail why and how human civilization evolved. When tackling any question so large, oversimplification is inevitable. Sure, war was essential to the evolution of modern society. He makes an excellent case that you cannot explain the development of large empires and nation-states without war. He is correct that agricultural advances, urbanization, and far-flung trade networks can all happen in the absence of a state, and that a state’s main purpose, at least until modern times, has always been the waging of war. But the fact that war has proven essential does not imply that it is sufficient. He discusses the importance of religion, too, but seems to assume that unless it helps a nation wage war it serves no function. He makes the same sort of assumption about every element of culture he discusses: horses, wheels, farming, and even cooperation itself. The ultimate utility of all these innovations is in waging war, he claims. But it does not follow that just because the primary function of states is warfare, that the primary function of all the rest of culture is warfare. Life is more complex than that. There have always been plenty of selective forces aside from war.

Finally, Turchin falls into the trap of projecting recent “progress” indefinitely into the future. In an early chapter, he is quick to criticize the progressive view of human history, correctly pointing out that evolution need not lead to improvement. Bafflingly, the rest of his book seems to assume the opposite. States will continue to get larger, encompassing the entire world. Cooperation will become more and more prevalent, he claims. He seconds Pinker’s prediction that violence will continue to decrease.

But modern civilization is very far from sustainable. None of our advances can be counted on to last, not while 90% of our energy comes from nonrenewable resources, not while inequalities continue to rise, and especially not when every major civilization before ours has eventually declined and collapsed due the same kinds of unsustainability.

I’m sure Turchin would admit all of this. But like Jared Diamond and other popularizers, he knows what people want to hear. So he is careful to provide a happy ending, one that leaves all our progressive illusions intact, and enthrones science as our savior. Near the end of the book he writes, “What we need to do now is develop the science of cooperation to the point where we can use it to improve people’s lives.” (After all these decades it’s still not at that point?) And elsewhere: “This, then, is the great hope for humanity: that war can finally fade away, displaced by more obviously constructive contests.” (Good luck.)

Turchin, Peter. Ultrasociety: How 10,000 Years of War Made Humans the Greatest Cooperators on Earth. Beresta Books. Kindle Edition.
Posted by Sam Thomsen at 6:24 AM

Email ThisBlogThis!Share to TwitterShare to FacebookShare to Pinterest
Labels: Against Progress, Science and Ecology